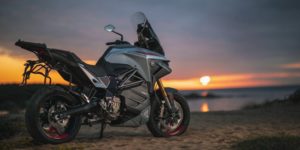 The Italian electric motorbike manufacturer Energica has presented its new Experia model. It is the first model of a new platform called ‘Energica Green Tourer’. The electric motorbike is supposed to be lighter and more rideable.

Innovations on the Energica Experia include a revised electric motor, new battery chemistry and a new frame and chassis design, all aimed at reducing weight and improving balance and rideability, according to Energica. The Experia was unveiled on the sidelines of the MotoGP race in Mugello, Italy, which also hosted a round of the MotoE – currently the electric motorbike racing series is still running Energica machines this season.

Even though Energica has so far been known primarily for its MotoE racing machines and rather sporty electric motorbikes like the Ego, the Experia focuses on other values: thanks to the new frame and the new battery, the centre of gravity is significantly lower, which should make riding more comfortable and stable, especially at low speeds. As usual for a tourer, there is the option of attaching several panniers for luggage. In addition, the seating position is much more upright, as is typical of a tourer.

Energica has not yet revealed prices and dates for the market launch of the Experia.