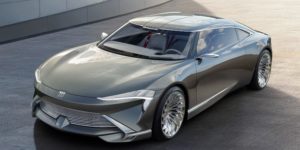 The General Motors brand Buick has announced its transformation into an all-electric car manufacturer by the end of this decade. Buick’s future electric cars will be marketed under the Electra label and will use GM’s Ultium platform.

The first Buick electric car for North America is planned for 2024, according to GM. For Buick, it will be much more than just a new model with electric drive: the US company is also giving its brand a complete relaunch in the course of this.

Currently, the most obvious feature is the new logo: although the so-called “tri-shield design” remains, the three shields are no longer slightly offset and framed by a chrome circle, but will in future be placed next to each other at the same height – without a frame. The new logo is to be fitted to the cars as early as next year; the current logo dates back to 1990.

According to the press release, the slimmer brand emblem is only a harbinger of a new design language that will also be slimmer and more modern. A preview of this is provided by the Wildcat EV concept car, a 2+2 coupé. With a long front bonnet and a suggested radiator grille, the design is rather conventional – although more dynamic and aggressive than the current models. Buick does not provide technical data on the study.

“The Buick brand is committed to an all-electric future by the end of this decade,” says Duncan Aldred, global vice president, Buick and GMC. “Buick’s new logo, use of the Electra naming series and a new design look for our future products will transform the brand.”

As is so often the case in the auto industry, this change will be a little faster in the Chinese market: in China, Buick will introduce five new electric models by 2025. Two of these are due to be unveiled this year. Buick’s EV portfolio in China will cover the MPV, SUV and sedan segments.

But: The electric Buicks for China will differ from the US models. With the Electra-X concept, Buick has given a preview of the design of the future electric Buick production models in China. This is a further development of the 2020 study of the same name.

8,445 new electric cars registered in Norway over May