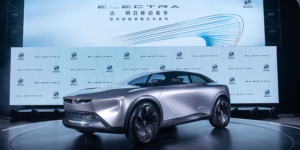 In China, Buick presented the all-electric concept car Electra, which provides an outlook on the electric future of the General Motors brand. The crossover model uses GM’s new electric platform with an ‘Ultium’ battery.

When it comes to the technical data, Buick starts at the top end possible with the Ultium platform: the range is to be up to 660 kilometers. In terms of propulsion, the Electra concept relies on two electric motors (one per axle) and a maximum output of 435 kW.

However, the vehicle is a concept car, not a near-series study. The sprint time to 100 kph of 4.3 seconds is a rather theoretical value. The Electra has 23-inch rims, free-floating seats and an equally free-floating dashboard consisting exclusively of a curved display. The minimalist steering wheel currently probably has similarly little chance of series production as the door concept with counter-rotating, upward-swinging portals. Nevertheless, GM says in the communication that the Gran Turismo offers a glimpse of Buick’s next-generation design language for electric vehicles.

The concept car uses the latest GM technology, but was designed by Buick together with its Chinese joint venture partner SAIC. “Today, Buick’s innovative thinking and imagination of future intelligent mobility have reached the next level with the Electra,” said Sam Basile, Executive Vice President of SAIC-GM. “I am confident that the aesthetics and technology innovations reflected on the Electra will ultimately help reset consumers’ expectations, just as all previous Buick concepts have done.”

With Ultium technology in battery and electric motors, General Motors intends to launch an electrification offensive. The Ultium vehicles will have a new battery management system called wBMS (wireless Battery Management System). This will not only reduce wiring within the battery by 90 per cent, but also improve scalability and adaptability to new models. For the drive (called Ultium Drive), GM relies on five different drive units.

In the USA, various models of GM brands have already been confirmed on Ultium basis, such as the GMC Hummer EV or the SUV Cadillac Lyriq. In addition, there will also be a Cadillaq Celestiq luxury sedan, which will be largely handcrafted using the technology. With the Electra, there is now a first glimpse of a much more futuristic Ultium-based model.

The new Velite 6 EV is powered by a larger 61.1-kWh lithium-ion battery and joins the Velite 6 plug-in hybrid and Velite 7 all-electric SUV in Buick’s NEV lineup in China. The three variants of the Velite 6 EV are priced between RMB 159,900 and RMB 178,900 after national subsidies.