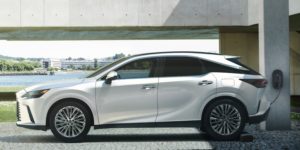 Lexus has unveiled the fifth generation RX SUV series, which comes as a plug-in hybrid for the first time next to another two hybrids. However, Lexus expects the PHEV to become the best-selling RX model in Western and Central Europe.

The new Lexus PHEV is labelled RX 450h+ and has 225 kW of system power and an 18.1-kWh battery, allowing a range of 65 kilometres in electric driving. Lexus gives the weighted and combined WLTP consumption as 1.1 to 1.2 litres per 100 kilometres. These are provisional figures – final homologation should be available by the expected sales launch at the end of 2022.

The gasoline engine is a 2.5-litre four-cylinder coupled with an electric motor. An additional electric motor on the rear axle enables all-wheel drive. Lexus does not name individual outputs, only the system output. “Overall, it offers roughly the same output as the outgoing RX 450h, but with more torque and faster acceleration. With more of the power coming from the electric motors, driving feels effortless yet refined,” writes Lexus.

Lexus does not yet provide details on the charging system in the announcement. Thus, the plug-in hybrid’s charging power is unknown, as is whether DC charging will be available. The new Mercedes GLC unveiled on Wednesday, for example, can charge with up to 60 kW DC as a plug-in hybrid – but at 31.2 kWh, it also has a significantly larger battery than the Lexus.

With the 225 kW, the vehicle should be able to accelerate to 100 kph in around seven seconds. The RX 450h+ can drive up to 135 km/h in purely electric mode. When the battery is empty, the control system switches to the hybrid logic of the two full hybrids.

This is the RX 350h with a system output of 180 kW. This model uses the same 2.5-litre gasoline engine as the plug-in hybrid. Consumption is said to be between 7.6 and 8.0 litres per 100 kilometres.

In addition, the top model is the RX 500h with 273 kW of power. This not only uses a different combustion engine (for the first time in a Lexus hybrid, a turbocharged gasoline engine with 2.4 litres displacement) but also a unique hybrid system with two electric motors. The front one sits between the combustion engine and the transmission, while the rear is an 80 kW e-axle. This hybrid is controlled by the Direct4 system that Lexus developed for the all-electric RZ 450e.

Unlike other model changes, the new RX has not become longer. The vehicle is slightly wider, but one centimetre flatter than before. Since the wheelbase has been extended by six centimetres, Lexus claims there is more space in the interior and better ride comfort.

“For the all-new RX, we were determined to keep the Lexus DNA of supreme quality, ride comfort and refinement and elevate the driving experience to the next level, delivering a unique Lexus driving signature,” said Koji Sato, president of Lexus International.

Sales of the new RX are expected to begin in late 2022. Lexus is not yet naming prices.

Volkswagen opens pre-booking for the ID. Buzz in the UK

Series production of the ID. Buzz begins in Germany