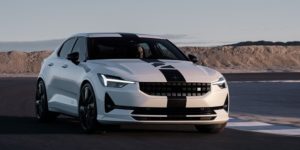 Polestar is launching a special limited edition model of the Polestar 2. The Polestar 2 BST Edition 270 includes mechanical as well as design modifications to differentiate it from the standard Polestar 2 models.

The powertrain is the same as the Polestar 2 with Performance Package: the two electric motors and 78 kWh battery achieve the maximum output of 350 kW and 680 Nm of torque, “coupled with improved responsiveness and sportier dynamics”, the company adds. The latter is said to be achieved by a 25-millimetre lowered suspension, specially developed two-way dampers from Öhlins, 20 per cent stiffer springs and 21-inch rims. The Brembo brakes are the same as on the Performance model. There are also Pirelli tyres, which Polestar says were specially developed for the special model.

However, the most visually striking feature, the matt black body stripe, is only an option – it is also possible without it. The special model is available in the Thunder or Snow paint finishes, with the “Battleship Gray” matt paint finish optional.

As the name suggests, only 270 units will be built exclusively for Europe, North America and China. “We had a great reaction to the specially modified Polestar 2 we showed at the Goodwood Festival of Speed in 2021 and the response made it clear – we should create a version like that for production,” says Thomas Ingenlath, CEO of Polestar.

Tesla to stop hiring and cut jobs by 10%