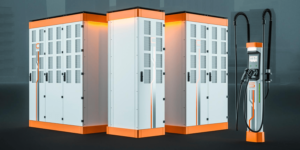 The system is based on Kempower’s existing ‘S-series’ satellite charging columns for electric cars and buses with dynamic power distribution. The original S-Series enables charging smaller EVs simultaneously using air-cooled cables. Kempower has replaced these with liquid-cooled cables in the extended version. Both versions can be combined in the modular installations, and the S-Series offers power from 40 kW to 600 kW.

Providing 400kW of continuous power means that the liquid-cooled satellite charger will enable vehicles to be charged more quickly by delivering higher power. This improvement will help overcome one of the last remaining barriers to the electrification of heavy-duty transport, writes the company.

“We believe that electric will be the winning technology for heavy-duty vehicles in the long run,” Ristimäki adds.

Kempower will showcase the new system at EVS35 (June 11-15) in Oslo. Subsequently, the product will be available worldwide, with deliveries expected to begin in Q3 2022.

Existing clients include Mer in Norway. The company had signed a framework agreement this April saying it would roll out DC infrastructure “at scale” without adding numbers.

Kempower also supplies DC chargers to the Finnish retail cooperative S Group, which recently announced a tripling of its charging network. In this case, Kempower could provide numbers. S Group aims to grow its network from 50 locations at the end of 2021 to over 150 sites with around 1,000 charge points by the end of 2022.

Audi Charging Hub to open in Zurich this year