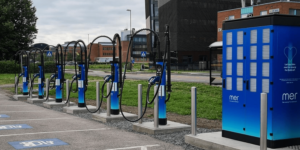 Norwegian charge point operator Mer says it has opted for Kempower from Finland to deliver fast-charging equipment to Mer in Norway. They have signed a framework agreement and say they will roll out the DC infrastructure “at scale.”

How many DC chargers the new agreement entails was not disclosed, however. “We have an ambitious build-out programme in Norway in order to keep up with the strong EV adaptation,” was all Nicholai Sheridan Jørgensen, managing director of Mer Norway, said.

Tomi Ristimäki, the CEO of Kempower, added that the company has “recently gained a strong foothold on the Norwegian charging market, and we are looking forward to further developing the charging experience with Mer’s customers.”

Mer Norway (formerly Grønn Kontakt) was founded in 2009 and has since built over 300 fast-charging stations throughout Norway. Owned by Statkraft, the company also has a foothold in Sweden, Germany, Austria, and the UK.

Kempower also supplies DC chargers to the Finnish retail cooperative S Group, which recently announced a tripling of its charging network. In this case, Kempower could provide numbers. S Group aims to grow its network from 50 locations at the end of 2021 to over 150 sites with around 1,000 charge points by the end of 2022.

Kempower has a range of DC charging stations delivering 40 to 320 kW. The company did not state which type of hardware Mer will use in Norway.

In other markets, for example Austria, Mer has opted to install ultra-rapid chargers delivering between 150 and 300 kW as reported. There Mer is using Hyperchargers from Alpitroniq.

Saemes to install over 1,000 charge points in Paris car parks