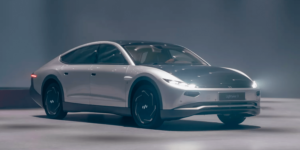 Three years after it was first unveiled, Dutch start-up Lightyear, which emerged from the TU Eindhoven solar team, has unveiled the final design and specifications of its long-range solar car, renamed Lightyear 0 from Lightyear One.

Production at contract manufacturer Valmet Automotive is scheduled to begin this autumn, with the first examples to be delivered in November. The changes to the three-year-old prototype to the production model now shown are minimal, at least visually. The body of the aerodynamically optimised sedan differs from the Lightyear One only in details; at first glance, the most striking feature is the modified headlight design.

With the production model, the final technical data are also known – and there are quite a few deviations. As a reminder: When the Lightyear One was unveiled in June 2019, a WLTP range of 725 kilometres and a standard consumption of just 8.3 kWh/100km were stated as targets.

In the end, the production model did not quite meet these targets. The WLTP range of the Lightyear 0 is given by the company as 625 kilometres, the consumption is 10.5 kWh/100km. If you add the up to 70 kilometres per day with electricity from the solar cells to the pure battery range, according to Lightyear, the theoretical range of 695 kilometres is already much closer to the development target. The battery pack, by the way, has a capacity of 60 kWh.

Several factors contribute to the still remarkable range, such as the efficiency of the drive itself, but also the weight and aerodynamics. With an unladen weight of 1,575 kilograms, the Lightyear 0 is relatively light considering its length of almost five metres, but the biggest factor is its low aerodynamic drag. Lightyear gives the cW value as less than 0.19, which again undercuts vehicles like the mercedes EQS and the Tesla Model S Refresh. However, the company does not name the frontal area. Aerodynamically optimised cars with a sloping roofline are not considered particularly practical, however, because the roofline limits the boot volume. In the Lightyear Zero, however, it is still 640 litres with the rear seat backs up.

For the drive itself, Lightyear relies on wheel hub motors from Elaphe. These are said to have an efficiency of 97 percent and thus lose very little energy in the form of heat and friction. Lightyear even calls it the most efficient series drive in the world, which was developed together with Elaphe.

CEO Lex Hoefsloot justified the renaming to Lightyear 0 with the striving for lower CO2 emissions, which should be as close to zero grams as possible. On the way to these zero grams, the Dutchman sees the solar concept as superior to pure battery electric cars. With the boom expected by 2030, the charging infrastructure will not be able to keep up. “To minimise charging and maximise range, the industry’s strategy so far has been to add more batteries. This increases the carbon footprint of production and in turn increases the weight and need for high-capacity charging stations,” Hoefsloot said. “Our strategy reverses this approach. Lightyear 0 offers more range with less battery, reducing weight and CO₂ emissions per vehicle.”

As early as the end of 2024 or the beginning of 2025, Lightyear wants to present its second solar electric car, which is designed for the mass market at prices starting at 30,000 euros. As the company states in the course of the current premiere, despite the renaming of the Lightyear 0, the working title is still Lightyear Two. However, Lightyear did not say whether this will also be the name of the production model.