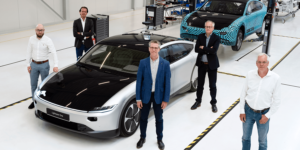 Dutch technology company Lightyear has signed a memorandum of understanding with Valmet Automotive for vehicle production. The contract covers the production of the exclusive series of the Lightyear One solar electric car and is expected to be finalised in August.

The start of production at Valmet Automotive’s car plant in Uusikaupunki, Finland, is planned for the first half of 2022. The first deliveries are also scheduled for 2022. The memorandum of understanding now signed was preceded by an “extensive selection process”, Lightyear informs, highlighting that Valmet, as an established car manufacturer, cooperates with both established brands and start-ups and has been active in the production of electric cars for more than ten years.

“Our experience as a car manufacturer as well as our focus on electric mobility and battery systems make us predestined for processes in which mobility must be redefined. We are ready to enter new areas in manufacturing cars and are therefore pleased that Lightyear has selected us as their production partner,” says Olaf Bongwald, CEO of Valmet Automotive. Production of the Lightyear One requires a new, model-specific assembly line, according to Valmet. Valmet has been focusing heavily on electric mobility for several months, investing primarily in the expansion of battery production capacity. In October 2020, the company also announced that it would withdraw from traditional engineering services in order to focus more on e-mobility as a contract manufacturer and system supplier.

Lightyear is a Dutch start-up that emerged from the solar team at TU Eindhoven. Founded in 2016, the company had introduced the Lightyear One in 2019. The electric sedan is said to be characterised on the one hand by its extremely high efficiency and on the other hand by the solar panels integrated into the aerodynamic body. At the presentation, a targeted WLTP range of 725 kilometres was mentioned – made possible not by a large battery, but by consumption of just 8.3 kWh/100km.

Only a few weeks ago, Lightyear announced that it had subjected its latest test prototype to an initial validation test and driven 710 kilometres without stopping to charge. The model had a 60 kWh battery on board. However, the official WLTP driving cycle test is still pending. “At a speed of 85 km/hr, we drove for almost 9 hours straight on one single charge. Even the most efficient electric cars on the market today consume around 50% more energy at this relatively low speed,” the company wrote. Based on the results, the Lightyear One will now be improved even further, it said.

Important to know: Lightyear had already sold 100 One vehicles in 2019 at prices beyond the €100,000 mark. However, the startup subsequently announced its intention to release a more affordable version of its long-range solar car, which will be produced by a contract manufacturer and cost only a third of the One it built itself.

The above-mentioned cooperation is thus a set-up for the market launch of this affordable version. According to information from January 2020, the ambitious goal is the series production of more than 100,000 solar cars per year from 2023 at a sales price of around 50,000 euros. The production of an exclusive series of 946 vehicles is initially planned for 2021, it said at the beginning of the year.

Lightyear is covering its capital needs through investors, among others. In March, the company announced the conclusion of its largest financing round to date with proceeds of 48 million US dollars. However, according to information from the spring, the Dutch company is also planning additional equity financing, which is to be carried out this year.