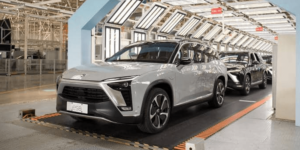 Audi has filed a lawsuit with a Munich court against the Chinese electric car manufacturer Nio for infringement of trademark rights, as reported by the German trade publication Handelsblatt with reference to company circles. The reason is that Audi considers the model designations of the Nio ES6 and ES8 to be too similar to its own S6 and S8.

“Like many successful companies, Audi is always keen to protect its trademark rights comprehensively,” a company spokesperson confirmed the proceedings. The opposing party had chosen model names for the European market “which we believe infringe Audi trademarks”. As the legal clarification of the matter is still pending, Audi did not comment any further on the matter.

Audi is increasing the legal pressure in its trademark dispute with the up-and-coming Chinese electric car manufacturer Nio. After Audi had already filed a complaint against Nio with a Munich court for infringement of trademark rights in the ES6 and ES8 model designations, Audi has now also complained to the EU Intellectual Property Office that Nio’s ES7 infringes trademark rights. If Audi is successful with its complaints, Nio may have to rename its ES series in Europe.

Porsche to fix Taycan production issues in the USA