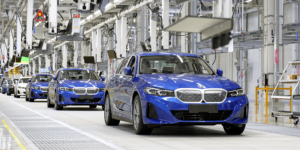 The Lydia plant is fully flexible and can produce up to 100 per cent fully electric vehicles, according to the automaker. The opening ceremony is more symbolic: production at the plant has already been running since mid-May. The new BMW i3 eDrive 35L is built there – an electric sedan based on the 3 Series Sedan, which has nothing in common with the European i3 despite the similarity in name.

According to the Munich-based company, the Lydia plant is the BMW Group’s largest single project in China, costing 15 billion yuan (2.13 billion euros at the current exchange rate). The new plant has all major production processes from a press shop to the body shop and paint shop to final assembly.

“Plant Lydia is born digitally and geared towards e-mobility,” says BMW Board Member for Production Milan Nedeljković. “Responding to our customer’s demands, the flexibility of our production sets the benchmark in competition. Plant Lydia is a great example of this. It is fully capable of producing up to 100% electric vehicles. Together with its neighboring plants in Tiexi and Dadong, Lydia will play an important role in accelerating production of BMW electrified vehicles in China.”

BMW had only increased its production capacity in mid-April. At that time, an expansion of the Dadong plant (also in Shenyang) went into operation. As is well known, the electric iX3 is produced for the global market in Dadong, but the X3 derivatives with internal combustion engines as well as the 5 Series are also built there for the Chinese market. Parallel to the plant expansion, production of the BMW X5 with extended wheelbase was also started for China.

In one respect, however, the new Lydia plant differs from Dadong: Lydia is the first BMW plant in the world to be planned and simulated entirely in a virtual environment from the outset, “with every detail of the entire production process designed virtually”, according to BMW. The basis for the virtual environment is the ‘Unreal Engine’, owned by Epic Games, which is better known for computer games. This had shortened the planning time by six months, as cross-regional and cross-time-zone cooperation (even in times of pandemic restrictions) was possible in the virtual world.