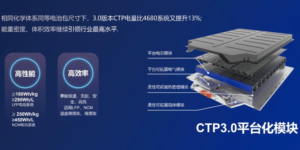 The Chinese battery manufacturer CATL has presented the third generation of its cell-to-pack battery technology, which was announced a few months ago. With it, ranges of over 1,000 kilometres are supposed to be possible “in the blink of an eye”. Production and market launch is planned for 2023.

The battery, named Qilin, sets a new record for volume-based usage efficiency at over 72 per cent, says CATL. That is, 72 per cent of the ready-to-install battery pack is filled with cells. When CATL introduced the first generation of cell-to-pack (CtP) technology in 2019, the volume usage efficiency was 50 per cent.

According to the manufacturer, this was made possible by a new construction method: In the CtP 3.0, the internal cross-member of the pack, the plate for liquid cooling and the heat conducting pad are integrated into a multifunctional intermediate layer. In addition, the interlayer has “micrometre bridges” that are designed to flexibly accommodate changes in the cell and improve battery reliability throughout its life cycle, according to CATL. Various components, such as the high-voltage connector and a protective vent for thermal runaway, have been rearranged, which alone has resulted in a 6 per cent improvement in installed capacity.

The Chinese company describes the liquid cooling design as “disruptive”. The cooling elements are placed between the neighbouring cells, which is supposed to increase the heat transfer surface fourfold. This is supposed to allow the cell to be cooled down “quickly under extreme circumstances” and also to prevent heat conduction between the individual cells. This should not only increase safety (in case a defective cell gets too hot), but also enable charging at high rates – CATL promises ten minutes to 80 per cent.

Besides the higher energy density, the advantage in CtP technology is the simpler construction: Since the battery modules are omitted, not only can additional wiring be dispensed with, but the batteries are also easier and thus cheaper to install. Since the “passive” material of the module sheathing and control is omitted, more active material can be installed in the same pack size, which ultimately leads to a higher energy density at the pack level with the same cell technology.

CATL does not yet name a customer for the CtP 3.0 in the announcement. In March, the portal PushEVs speculated that a customer for the CtP batteries with LFP cells could be Tesla. CATL already supplies the LFP cells for the base variants of the Model 3 and Model Y. Currently, these batteries come to 125 Wh/kg. If Tesla were to actually install the CtP battery with the 160 Wh/kg mentioned, the energy density would increase by 28 per cent.