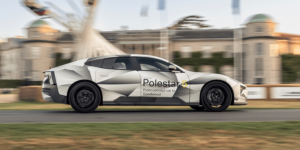 At the Goodwood Festival of Speed, Polestar presented for the first time a development prototype of the Polestar 5, scheduled for market launch in 2024. In addition, Polestar now officially states target values for the performance of the four-door electric GT.

The dual-motor powertrain, which is currently being developed in Sweden, is expected to produce over 650 kW and 900 Nm of torque with a new rear-mounted electric motor and an 800-volt architecture. That Polestar is working on an 800-volt architecture and its own electric drive systems was leaked in December 2021. According to reports at the time, a drive unit would be able to produce up to 475 kW.

Whether the prototype’s system output of 650 kW is distributed equally between the front and rear axles (2x 325 kW), as in the Polestar 2, for example, or whether Polestar has chosen a more rear-heavy power distribution here, is not directly confirmed in the manufacturer’s announcement, but there are many indications of two different drive units at the front and rear. “A new rear electric motor will provide superior output, along with 800-Volt architecture. Combined with a high-output front electric motor, the complete dual motor powertrain aims to deliver 650 kW (884 hp) and 900 Nm,” the company wrote. So, should the rear engine get to 475 kW, the front drive unit would contribute at least 175 kW.

“The new powertrain we are working on will set a new brand benchmark in our high-performing cars,” says Jörg Brandscheid, CTO and head of Polestar’s research and development department. “Combining strong electric motor engineering ability with advances in light-weight platform technology is leading to truly stunning driver’s cars.” Polestar is not providing details on the battery and charging system at this time.

The bodyshell will be made of bonded aluminium, which is one of the ways to save weight – the body is being developed in England. “Polestar 5 is shaping up to be a superb 4-door GT and a true Polestar at heart,” says Pete Allen, head of research and development at Polestar UK. “The platform combines low-volume performance car attributes with modern technological advances to bring light-weight, high-rigidity sports car chassis technology into mass production.”

At the Festival of Speed, which in the absence of a major British motor show has over the years become a showcase of new products from manufacturers on the island, the Polestar 5 prototype will race twice a day in the “First Glance” group up Goodwood’s legendary hill. Porsche had also entered prototypes of the Taycan before its premiere at Goodwood.

McLaren to use Nissan drives in Formula E