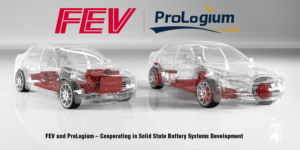 The German engineering service provider FEV has teamed up with Taiwan’s Prologium for their solid-state battery expertise. Under the MOU, they will focus on developing customer-specific battery systems, sales and cell/module verification based on Prologium’s SSB technology.

ProLogium had unveiled its MAB (Multi-Axis Bipolar+) assembly technology for solid-state battery packsat the CES in 2020, then also reported to have “signed several strategic cooperation agreements with various car manufacturers”. Mercedes is a multi-million-dollar investor since January and VinFast and Nio also have ties with the Taiwanese company.

For FEV, Prologium “ideally complements our 360-degree battery development,” said Prof Stefan Pischinger, President and CEO of FEV Group. “Due to our unique development and testing capabilities, we are able to design cutting-edge technology, which meets all regulatory requirements and customer demands around the world,” he added, thus explaining FEV’s involvement in the deal.

The company runs a large independent battery development and test centre near Leipzig in Germany for high-voltage batteries.

Talking about solid-state batteries, Pischinger lists the usual advantages the batteries based on solid electrolytes exhibit over Li-ion batteries with liquid solutions: “SSBs impress with an extra mileage advantage because of their lighter weight and smaller volume for the same capacity.” He adds, “the core competencies deal with cell development, but also with the integration at the pack level and the algorithms for controlling the technology.”

ProLogium claims its automated pilot production line has provided nearly 8,000 solid-state battery sample cells to global car manufacturers for testing and module development. Their GWh-level solid-state lithium ceramic battery plant will be the first in the world to go online in early 2023. It aims to begin scaling up from Q3/2023, followed by capacity expansion plans in major markets worldwide.

So far, Prologium’s ceramic-based solid-state batteries in real life power mostly smaller devices such as watches. The first advance in e-mobility can be seen in the scooter developed with Gogoro as reported. The project is at prototype stage with current capacity given at 2.5 kWh, an increase by 47 per cent over the liquid Li-ion battery.