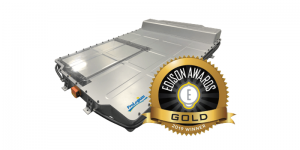 MAB stands for the “Multi Axis BiPolar+” technology on which ProLogium relies. In order to improve the energy density of the solid state battery (SSB), the company says it has eliminated the “unstable” NMC-811 cathodes or lithium metal anodes. The MAB construction with a mechanical design tailored to solid state batteries is also intended to improve “assembly efficiency”.

A “battery” – probably the battery pack – should only consist of 4 to 12 cells, which should save a lot of space. After several improvements, the assembly efficiency could be increased between 29 and 56.5 per cent compared to conventional battery packs, according to ProLogium. The company understands this to mean that with the same energy density of the cells, the energy density at the battery pack level is 29 to 56.5 per cent higher with ProLogium technology.

The company does not provide any technical details about the cells or the assembly technology in the press release. The modules are safe and stable, cables and mechanical protection can be “substantially” simplified, it says.

ProLogium confidently states that it is eliminating concerns about the use of solid state batteries on a larger scale. Following the presentation of the MAB packs at CES 2019, the company entered into collaborations with several electric car manufacturers including Nio, Enovate and Aiways. However, the car manufacturers have not yet announced concrete series models with the technology.