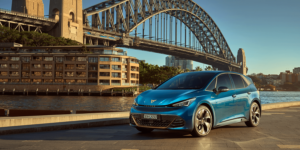 The new Labor government of Australia plans to deliver on its ‘Electric Car Discount’ policy from 1 July, then providing exemptions to certain import tariffs and fringe benefits taxes. This will effectively make some EV models cheaper, depending on the country of origin.

In particular electric cars coming to Australia from most of Europe, Japan and South Korea will benefit from price cuts in the thousands, once the import tariff of five per cent finally falls. As The Driven writes, the government confirmed it would honour a promise to provide exemptions from certain federal taxes from the start of July.

However, popular models to benefit from the incoming lift of the import tariff are the Nissan Leaf, the Mercedes EQA, the Hyundai Kona EV, and the Mini Cooper SE. To stay concrete, the Electric Vehicle Council estimates that a $50,000 model such as the Nissan Leaf will be more than $2,000 cheaper due to removing the import tariff.

In addition, there is the so-called fringe benefits tax. It applies to company car’s provided by employers for their staff’s personal use and attracts a 47 per cent tax rate on the financial benefit of the arrangement, explains The Driven.

The Labor government estimated that excepting EVs from the fringe benefits tax could cut the effective cost of electric vehicles by as much as $9,000 for models costing around $50,000 – and should have flow-on benefits for the second-hand EV market.

Any exemptions will only apply to electric vehicles with a sale price below $77,565 in 2020-21, the luxury car threshold for fuel-efficient vehicles in Australia.

The continent has been lagging behind in electric vehicle uptake due to previous unfavourable policies. At present, just 1.5 per cent of cars sold here are electric and plug-in hybrid – compared to 17 per cent in the United Kingdom, and 85 per cent in Norway, writes the new government. This amounts to around 24,000 registered electric cars on Australian roads, of around 15 million total cars.

“This is because the UK Government, and governments worldwide, have introduced incentives and policies to help electric cars compete with older technology with lower upfront costs,” writes Labor.

Their new national ‘Electric Car Discount’ will begin on 1 July 2022 and be reviewed after three years, in light of electric car take-up at that time.

The government has yet to state specifically, whether the exemptions will only apply to zero-emission vehicles including FCEV.

Previously, there have been only regional efforts to increase EV uptake such as in New South Wales or Western Australia as reported. However, this often came on the back of road taxes for electric vehicles.

EU Council confirms ICE ban for cars and vans by 2035