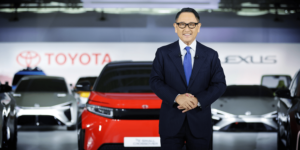 Akio Toyoda, president of Toyota and chairman of the Japan Automobile Manufacturers Association (JAMA), is reported to have secured an amendment to a key policy document by Japan’s government to include hybrid vehicles in the category of electric vehicles, effectively putting them on an equal footing.

The use of synthetic fuel would make hybrid cars “100% clean”, Toyoda argued. He says that JAMA could not support a government that rejected hybrids. The final version of the document refers to Japan’s 2035 target for all new car sales domestically to be “so-called electric-powered vehicles” and specifically mentions in the main text that such vehicles include hybrids. An earlier draft, dated 31 May, had mentioned the reference to hybrids only in a footnote, while the main text stated that all new car sales in 2035 should be “electric vehicles”.

“Sorry, Elon,” the My Ami Beach Buggy was sold in mere minutes