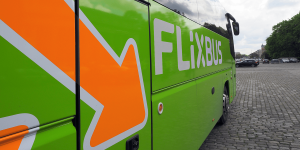 FlixBus has launched the first electric express bus in Portugal in partnership with the local operator Auto Viação Feirense. The route from Bragança Bus Terminal to Porto includes stops in Vila Real and Amarante. This is not the first time that Flixbus has used (or trialled) long-distance electric buses.

In Portugal, FlixBus opted for a zero-emission coach from Yutong that has 47 seats and a range of around 350 km, with charging taking around three hours. The service runs between Porto at the coast and Bragança near the Northern border with Spain.

“It’s just a small step, but it represents a lot for sustainable mobility in Portugal,” said Pablo Pastega, general director of FlixBus for Portugal and Spain. “For FlixBus, it is to continue the project that we have to provide millions of people with sustainable and accessible mobility.”

FlixBus had started to do so in Germany, when it launched the connection Mannheim – Frankfurt. However, the BYD bus soon started exhibiting problems. FlixBus CEO Fabian Stenger at the time explained that the lithium iron phosphate battery of the BYD C9 turned out to be so susceptible to faults that “the bus had to stop for several days at a time and as many trips had to be cancelled”. The company cancelled the route in the end, as reported.

In California, Flixbus has been testing a bus from Motor Coach Industries (MCI) between San Francisco and Sacramento since 2019.

However, most recently, FlixBus has turned to Freudenberg and ZF to start developing hydrogen-powered buses for low emission intercity services. The three-year ‘HyFleet’ project are focusing on fuel cell development to enable continuous operation of at least 35,000 hours. Another research focus is on hybridisation strategies for the powertrain, the so-called “right-sizing” between fuel cell and battery.

“We are proud to be part of the HyFleet project to develop the first fuel cell-powered long-distance bus in Europe until 2024,” says André Schwämmlein, co-founder and CEO of FlixMobility.