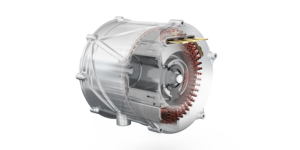 The automotive supplier Mahle has developed what it claims is the most enduring electric motor. The special feature: thanks to a new cooling concept, the SCT (Superior Continuous Torque) is supposed to be able to operate at high power for an unlimited period of time.

The supplier refers to the cooling concept as a “technological leap”. According to Mahle, this is an integrated oil cooling system that not only takes care of the cooling itself, but at the same time also enables the use of the resulting waste heat in the overall system of the vehicle.

According to the “latest measurement results”, the SCT is said to achieve a continuous output of over 90 per cent of the peak output. Mahle does not give absolute figures, however. Usually, the continuous power is lower because the drive overheats under high load and the power has to be reduced. An example chosen at random by the editors: the BMW i4 M50 has a peak power of 400 kW, but according to ECE R 85 it has a continuous power of 125 kW in the registration papers.

In addition, Mahle emphasises that the SCT should be particularly compact and light (also thanks to the integrated oil cooling). “Building large electric motors that deliver short-term high performance is easy. What was still lacking on the market until now were durable yet compact drives to make electric vehicles unrestricted for everyday use,” says Martin Berger, Head of Group Research and Advance Engineering at Mahle. “Our new SCT E-motor is the solution.”

In practice, this should offer several advantages, such as when used in demanding conditions. “A classic example is driving an electric truck over mountain passes or the multiple sprints of a battery electric passenger car. These scenarios are only insufficiently covered by the electric motors available on the market up to now,” Mahle writes.

The SCT is designed as a permanently excited synchronous motor, which makes the compact design with high energy density possible. In such a PSM, permanent magnets with neodymium are installed in the rotor. “To achieve greater independence from raw material prices and geopolitical developments”, the SCT can also be ordered magnet-free and thus without rare earth metals at the customer’s request. Here, at the customer’s request, Mahle then uses the technology that was presented last year in the “highly efficient and magnet-free” electric drive system.

The new development is suitable for passenger cars, commercial vehicles as well as construction machinery and tractors. The innovation will be presented for the first time at the IAA Transportation in Hanover in September 2022.

Chrysler to release electric sedan in 2026