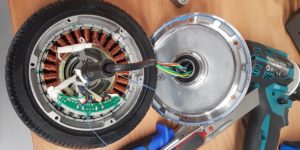 In a project called FUNMAG, researchers from the Fraunhofer IWKS want to show that commercial magnet recycling is worthwhile on a large scale. Funded by the Hessen Agentur, the team is working to prove that electric motors with recycled old magnets can deliver the same performance as with their original new magnets.

According to the Fraunhofer Gesellschaft research institute, despite expensive and sometimes problematic production, magnets usually end up in the scrap yard at the end of their useful life, where they are melted down together with the steel scrap. However, there are now proven methods for recycling magnets. With their project “Functional Magnet Recycling for Sustainable E-Mobility” (FUNMAG), the scientists set out to close the gap between theory and practice.

For the experiments, the team acquired an e-bike, an electric scooter and a hoverboard. “First of all, we looked at the characteristics of the electric motors in each of the new vehicles to determine the relevant key data we would later use to compare the power of the motors with recycled magnets,” says Konrad Opelt, head of the project.

It was important to depict realistic cases: “If scrap dealers decide to separate the magnets from engines that have been disposed of, it will generally be a real mixed bag of various magnets, the precise characteristics of which nobody is sure of,” Opelt continues. “Therefore, our aim was to show that the recycling process can also cope with undefined base materials, with these unknowns in the process. And nobody has done this before us.”

Compared to the production of a new magnet, some production steps, such as melting the starting material at around 1400 degrees, are omitted in the case of recycled old magnets. This would also relieve the burden of the environmentally harmful mining of the raw materials. The old magnets would be brought into contact with a hydrogen atmosphere and then go through the usual process steps. Thousands of magnets could be processed simultaneously in the recycling process, the institute writes. The performance of the recycled magnets can be determined on the finished product or even in the powder stage.

Currently, the scientists are still in the process of further optimising the preparation process during the recycling process. Opelt is confident, however, that the recycled magnets can soon be used in electric motors.

A property portfolio is to be derived from the investigations, which will provide future users with recommendations on how the recycling process can be modified in such a way that the desired target properties for the magnets are achieved, depending on the initial composition.