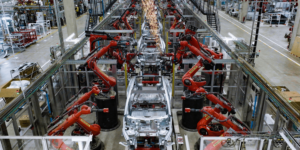 Tesla will pause production at Giga Berlin from next Monday, 11 July. Production processes are to be optimised by 22 July – according to reports, the cycle time will be halved in the future. Tesla has also applied to the city of Austin to expand the Texas Gigafactory.

The two-week break in production had already been planned, but the time period had not yet been fixed. Now, according to consistent media reports, it seems that the work will begin on 11 July.

The aim of the reconstruction is a significantly faster production: as the portal “TeslaMag” has learned from insiders (who are also one of the sources for the start of the measures on 11 July), the cycle time is to be significantly shortened with the optimised systems and processes. Currently, it is 90 seconds per cycle, but from August it will be only 45 seconds.

The current new hirings, on the other hand, are not intended to introduce a third shift. Instead of a night shift, the new employees are to be deployed in the two day shifts – for the halved cycle time, more staff is needed in many areas of production, according to insiders.

In addition, there will be more pay for the workers in Grünheide from August: New and old employees are to receive six per cent more pay from then on; management is to be exempt from this measure.

Meanwhile, at the second new Tesla factory in Austin, plans continue for the first expansions of Giga Texas, which opened in April. The company has applied to the city of Austin to build another building on the site. According to Electrek, the new building will be 500,000 square feet.

The application calls it a “GA 2 and 3 expansion”. The General Assembly refers to the final assembly, which means that two new assembly lines are to be set up in the building. It is not known whether Tesla intends to use the new assembly lines to expand the production of the Model Y or to create capacities for other models (such as the Semi, Cybertruck or Roadster 2).