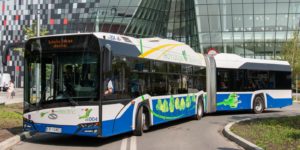 In Poland, Solaris has received another electric bus order from Kraków. The public transport company MPK Kraków ordered 20 electric buses from the Polish manufacturer: seven articulated Urbino 18 Electric buses and 13 Urbino 12 Electric solo buses. The vehicles are to be delivered in one year.

The new electric buses will reinforce the existing zero-emission fleet of Solaris buses, some of which already made their debut on the city’s streets in 2016. Solaris says the new electric buses will have Solaris High Energy batteries with a total capacity of almost 300 kWh in the solo buses and over 400 kWh in the articulated buses. Each bus will also be designed for charging by plug as well as by pantograph.

The order value for the newest buses is about 70 million złoty (about 14.5 million euros). More than half of the investment will be co-financed with subsidies from the National Fund for Environmental Protection and Water Management.

According to the company, Solaris vehicles have been in operation in Krakow for 25 years, in which time 550 Solaris vehicles have been put into operation in the city. Solaris says that the “lions-share” of these have had zero-emission drives. In June this year, MPK Kraków started tests of a hydrogen-powered Urbino 12 hydrogen. Most recently, Kraków Transport ordered a total of 50 electric articulated buses from Solaris in mid-2020, after 20 Solaris electric buses entered service in 2017.

Solaris has received another electric bus order from Kraków. The public transport company MPK Kraków has ordered 18 articulated electric buses from the Polish manufacturer. The contract also includes the option to extend the order by three more Urbino 18 Electric.

The electric articulated buses from the current order have the same drive technology as the configuration ordered in July: The 400 kWh battery can be charged both by CCS cable and by pantograph. The vehicles offer space for up to 141 passengers, 43 of them on seats.