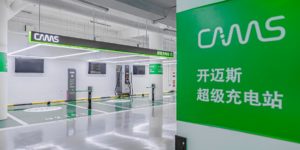 On its three-year anniversary, CAMS New Energy Technology has taken stock and announced a new product roadmap. So far, the joint venture for charging infrastructure in China, established in 2019 by Volkswagen Group China, JAC, FAW and Star Charge, has built 760 fast charging sites with more than 7,000 charging points in 100 Chinese cities.

CAMS strives to create a one-stop user-oriented vehicle charging solution and an optimal charging service system. Based on intelligent charging equipment, the company offers four charging scenarios: public charging, destination charging, home charging and future charging. According to CAMS, the joint venture has expanded its customer base by more than 600,000 BEV owners since the charging station was built in 2020. This has resulted in a total of 2.6 million charging sessions. The company’s efforts have been validated in other ways as well: In 2021, CAMS received the China Charging Pile Industry Innovation Award for Best Operational Service.

“Over the past three years, CAMS has continued to launch new technology products and improve the charging experience, enabling more and more customers to benefit from the premium service,” explains Thomas Manfred Müller, Executive Vice President of Volkswagen Group China and Chairman of CAMS. “The rapid development of CAMS will significantly drive the Group’s transformation in China while contributing to the development of sustainable mobility in China.”

The company is now aiming to expand its offering by more than 17,000 charging points by 2025, covering most Chinese cities – a figure it mentioned at Volkswagen’s Power Day in March 2021. CAMS wants to ensure “that users have access to a charging station within five kilometres of any point in the cities where its charging services are fully provided”. In addition, Joint Venture plans to use a charging cloud platform as the core to build a smart IOT charging system in the future. Research of high-performance charging, integration with autonomous driving and automatic charging solutions for robots will be further deepened.

CAMS was founded as a joint venture in 2019. At that time, the company was provided with a share capital of 812 million yuan (equivalent to around 105 million euros). VW, FAW, and Star Charge each held a 30 per cent stake in the joint venture, with JAC holding the remaining ten per cent.