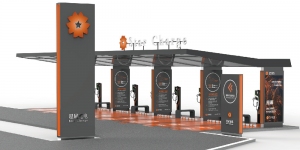 Volkswagen has now officially launched the joint venture for charging infrastructure announced in May in China together with their Chinese partners JAC and FAW, as well as Star Charge. The joint venture is called CAMS New Energy Technology.

As previously reported, CAMS will have a share capital of 812 million yuan (around 105 million euros). VW, FAW and Star Charge each hold a 30 per cent share in the joint venture, while JAC holds the remaining ten per cent. The fast-charging columns will apparently offer up to 360 kW.

By 2028, Volkswagen intends to sell more than half of the planned 22 million electric cars in China. The foundation stone for this will be the MEB plant in Shanghai, which is scheduled to go into operation next year. VW will then be able to sell 400,000 electrified vehicles in China.

China continues to be the world’s largest market for electric cars and is extending its lead, as the CAM analysis for the first half of 2019 shows. However, many customers are frustrated that the more than 400,000 public charging stations in the country are not always reliable. Many of the pillars were only erected because of subsidies but were no longer serviced during operation, making them increasingly unattractive.

Companies that see a business model in the operation of the charging stations also maintain them and keep them available. According to VW’s joint venture partner Star Charge, it already has over 90,000 charging stations in operation in 228 Chinese cities. Other car manufacturers such as Nio and Xpeng are also investing in their own shop networks.