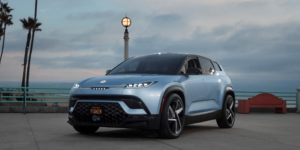 Fisker has appointed Alpay Uguz as Senior Vice President of Global Manufacturing with immediate effect. Prior to joining the electric car manufacturer, Alpay Uguz worked at BMW’s Spartanburg plant in South Carolina as general manager for the brand’s SUVs.

Indeed, much of Uguz’s work will take place in the design and development phase of Fisker’s electric cars, as the production chief will not have responsibility over his own factories: Fisker is known to work with a very lean structure without large capital investment: the company designs and develops the vehicles, and the production itself is carried out by contract manufacturers such as Magna and Foxconn. But: In the development of the vehicles, the foundations are already laid for simple production and fast assembly.

Uguz also has his own say in the announcement: “I’m excited to apply my knowledge of lean manufacturing deployment, new product launches, and appreciation for innovation in Fisker’s fast-paced environment, utilizing my cross-cultural experience working in China, Germany, the UK, and the US.”

Production of Fisker’s first electric car, the Ocean e-SUV, is scheduled to start in November at Magna in Graz.