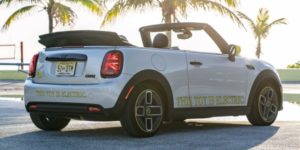 The BMW brand Mini has unveiled its first – and so far only – all-electric Mini Cooper SE as a convertible. As yet, this one-off electric car is not for sale, but it’s looking like there’s hope for a series model.

BMW is currently saying that the Mini convertible is “a unique specimen that shows how the path to an all-electric premium brand could continue and also electrify classic sporty open-air driving in the future.”

The one-off model uses the same drive components as the familiar three-door model – which in turn uses numerous components from the BMW i3s. The power of the electric motor on the front axle is 135 kW, with an acceleration from a standstill to 100 km/h in 7.7 seconds and a WLTP range of 230 kilometres. The German carmaker says that this electric convertible is supposed to transfer the “brand-typical go-kart feeling into the world of electric mobility”.

The components of the convertible roof are also standard parts that are familiar from the company’s combustion engine versions. The textile soft top can be opened or closed fully electrically in 18 seconds. This is also possible while driving at speeds of up to 30 km/h.

The one-off was built on the occasion of the community event “Mini Takes the States”, a tradition in the USA, which takes place on the winding roads between Burlington in the state of Vermont and Greenville-Spartanburg in South Carolina. Spartanburg is also home to BMW’s US plant, which is now the carmaker’s largest production site, even ahead of Dingolfing in Germany.

As far as the firmly-roofed series version electric Mini goes, just last month, the German trade publication Handelsblatt reported that the electric Mini that BMW has planned with Great Wall in China could also be exported to the US market. After a non-public presentation of the Chinese-made new electric Mini to American dealers in May, company sources were cited saying there was great interest in the USA. So much so, that the BMW board wants to decide by the end of the year whether the China Mini should be exported to the USA.