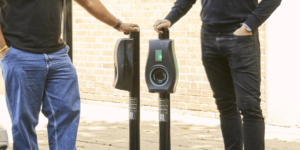 Gloucestershire plans to install 1,000 on-street electric vehicle charging points over the next three years. The council has already appointed Connected Kerb to install and run the network of EV chargers. Residents are being asked to give their views on locations.

The council said that its programme aims to prioritise access to charging points for the one-third of residents in Gloucestershire who do not have off-street parking and charging. The council has also started identifying suitable locations and is bidding for government funding to accelerate this work.

As for Connected Kerb, the British company specialises in on-street charging solutions. The chargers are made from recycled materials and use renewable energy.

The company’s CEO, Chris Pateman-Jones, said this was “the largest single installation of EV charging points” in the south-west.

Gloucestershire Council added that the network was to give residents the practical option of going electric as early as possible and way ahead of the incoming sales ban of ICE vehicles across the UK in 2030.

By that time, Connected Kerb reportedly aims to have installed 190,000 publicly accessible AC chargers in the UK. The company specialises in standard chargers with 7 to 22 kW for overnight street parking.

The British company now has three products. These include the Gecko charger, which can be attached to existing parking posts or bollards and is connected to an underground unit that monitors and controls the flow of electricity and data.

The company also offers two 7 kW chargers, the Limped and the Armadillo. The former is a wall box for mounting only on existing walls, while the latter is the company’s debut model, advertised as a kerbside charger and made from recycled material.

In May, they also launched the Chameleon unit. It looks like a bollard and does not require planning permission.

The British Government funds charging infrastructure through the On-Street Residential Charging Scheme (ORCS), which covers up to 75% of the cost of installation.

Connected Kerb entered the market in early 2019 with the first chargers in London, mounted on the kerb, on traffic sign poles or boundary bollards at the side of the road. The company now has charge points at around 300 locations in the UK.

In Gloucestershire, residents may state their views and ask for installations throughout the three years of the project by filling in this survey.

BE: Proximus to use 15,000 street cabinets for EV charging