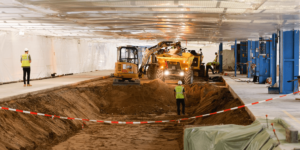 Ford is taking advantage of the plant holidays at the Cologne factory, which last until 1 August, to press ahead with the conversion to an Electrification Centre. Two new production halls will be built and existing production facilities converted.

Ford’s first fully electric volume model will roll off the production line here in Europe from 2023. It will be based on Volkswagen’s modular electric drive system (MEB). A second MEB model from Ford is to follow as early as 2024 – it will also be built in Cologne.

The completely new final assembly line for the as yet unnamed MEB model also includes a so-called stilt line, where Ford employees will prepare the underbodies for the so-called “wedding” in the future. For this stilt line, a pit about 100 metres long is currently being dug in the production hall. The wedding is much more complex for the MEB model than for the Fiesta because of the battery assembly. One example: instead of six screws, the robots will have to tighten 53 screws in this step in future. “The prior preparation of the body underbodies is correspondingly complex,” says Ford

“One of the biggest challenges in the transformation to the Electrification Centre is that we will initially produce the new E-model and the Ford Fiesta in parallel,” says Ford head of planning Darko Drazic. The MEB assembly line will be built in the ‘Y-hall’, where the paint shop and final assembly were previously located on two Fiesta production lines. One of these belts will now be completely dismantled to make room for the new facilities.

In addition to the new assembly lines, the overhead conveyor system will also be strengthened, according to the release, as the all-electric crossover model is heavier than the Fiesta previously assembled there. The team is also installing a new automated tyre assembly line and new test benches for headlight adjustment. The so-called i.O. line (i.O. for in order), where Ford employees carry out the final inspection of the vehicles, is also being renewed.

Before the bodies go into final assembly, they pass through the paint shop in the same hall. There are currently 45 construction sites there to optimise the processes at various points and make them more sustainable.

Opposite the Y-hall, a building about 25 metres high, 24 metres wide and 106 metres long is being built; construction has been going on here for over a year. In future, the bodyshells of the electric vehicle model will be pre-treated here before they go to the paint shop. Diagonally behind it, with a floor area of 25,000 square metres, is the second new hall, in which Ford will produce the body shells of the all-electric crossover. The structural engineering work on both buildings is almost complete. Now the interior work and the installation of the production equipment will follow. “We are absolutely on schedule with the construction work on both halls,” says planning director Drazic.