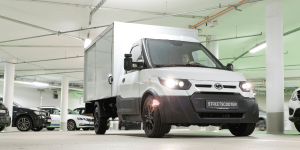 The deal grants CBS exclusive rights to sell B-ON’s electric vans through its dealerships in over 20 locations. B—ON, in turn, will also offer an OEM warranty, including the electric drivetrain, telematics, and charging, to be executed through CBS.

While 500 EVs in the initial order appear not much, the partners expect the contract to eventually comprise 20,000 vehicles per year and volume to increase when B—ON scales its production capacity in the US in the coming months.

At the same time, the company is considering three US locations to house a second local production line. A spare tooling set and conveyor line were already acquired as part of the January transaction, as was a fully operational manufacturing line in Duren, Germany, with the capacity to produce up to 30,000 vehicles per year.

Concerning today’s expansion, Stefan Krause, CEO and Chairman at B—ON, said CBS’ existing infrastructure would give the company “access to an expansive and well-trusted sales and service network right out of the gate.”

For CBS, the StreetScooter, now B-ON electric commercial vehicle, “fills an important void in the US market from an economic standpoint alone,” said Tony Matijevich, President at Creative Bus Sales. “Their products are a superb fit for us and our US customer base, and we’re extremely excited to be entering this partnership with the team.”

The company claims to service more than 2,000 customers annually and has over 30 years of experience with electric vehicles. For example, CBS supplied the first hybrid buses to the City of Los Angeles.

For B-ON, increasing production in the US will indeed be essential – apart from CBS, B-ON has agreed with GoFor in March this year to provide preferential access to the StreetScooter production capacity. Up to 3,266 vehicles may enter the delivery company’s service in the US and Canada by the end of 2023.

Odin Automotive reportedly became B-ON in May 2022, at the same time teaming up with Hitachi for charging infrastructure services. Hitachi Venture also became a shareholder.