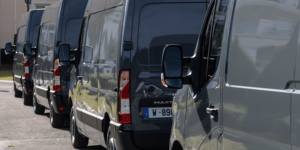 Renault UK has opened the order books for the zero-emission Kangoo E-Tech. The larger Renault Master E-Tech may arrive sooner with orders to start next month. Both vehicles qualify for the Plug-in Van Grant and feature next-gen technology.

Renault renewed the light commercial EV range in June. The Kangoo E-Tech in the second generation received a slightly extended range of 300 kilometres or 186 miles (WLTP), up from 265 km, while the battery capacity stayed at 45 kWh. Instead of a 75 kW motor, the new version offers 90 kW.

With the battery sitting under the load floor, cargo space remains unaffected, says Renault. The Kangoo E-Tech offers a load volume of up to 4.2m3, 615kg of payload, and 1,500kg of towing capacity.

Renault claims to charge at a 7.4 kW wall box in under seven hours, and rapid DC charging at up to 75 kW can deliver an 80% charge in around 43 minutes.

Prices for the electric Kangoo start from £26,500 plus VAT after the PiVG. The Plug-in Van Grant currently stands at 2,500 pounds or up to 35% of the purchase price for small vans.

Customers may pre-order at Renault dealers from today before order books open officially on 1 September, with first deliveries expected in October.

The Renault Master E-Tech may beat the Kangoo in the race by one month since Renault will open the order books in August and expects deliveries to start in September.

The large transporter also received a more impactful upgrade and now features a larger 52 kWh battery, up from 33 kWh, which extends the range to 126 miles or 202 km (WLTP), an increase of 68 per cent.

Using a 22kW DC charge point, clients can recharge the battery from 20 to 80 per cent in 90 minutes. Renault adds that 30 miles of charge can be added in 120 minutes via an 11kW charging station.

Five versions are available, all zero-emission, including Panel Van, Chassis Cab and Platform Cab, with the Panel Van offering a payload of up to 1,420kg and a load volume of up to 13m3.

Prices of the Master E-Tech start from £45,160 plus VAT after the PiVG.