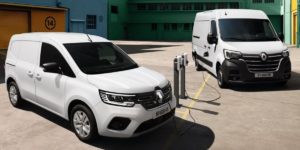 Renault has renewed its electric commercial vehicle range: with the new Kangoo Rapid E-Tech Electric, the French car manufacturer presents the second generation of its battery-powered compact van. In addition, the larger Master E-Tech Electric has been revised in the class up to 3.5 tonnes gross weight.

The Kangoo Rapid E-Tech Electric has an electric motor with 90 kW of power. The maximum torque is 245 Nm. The battery has a capacity of 45 kWh, which enables a range of up to 300 kilometres in the WLTP cycle. In the basic version, the vehicle is equipped with an AC onboard charger with 11 kW power. At an alternating current (AC) station, it takes two hours and forty minutes to charge the battery from 15 to 80 per cent of capacity. A 22 kW charger is available as an option. Depending on the version, fast charging with a direct current and charging power of 80 kW is also possible. At a fast-charging station with the appropriate power, the battery should be able to recharge for 150 kilometres in 30 minutes. However, this already requires the 22 kW AC charger; the DC option is not offered with the 11 kW charger.

If the vehicle is equipped with a 22-kW charger, the traction battery also has liquid cooling and electrical resistors. They automatically heat the battery to the optimum temperature level, which ensures as long a range as possible and reduces charging time, says Renault. In addition, the 22 kW version has a heat pump installed at the factory; in combination with the 11 kW charger, the heat pump is only available at extra cost.

The Kangoo Rapid E-Tech Electric will be available in two length variants – initially the standard version with up to 3.9 cubic metres of cargo capacity and 600 kilograms of payload. At a later date, Renault will offer the long version with a maximum of 4.9 cubic metres and a payload of up to 800 kilograms. For both versions, a towing capacity of 500 kilograms is also possible.

The French manufacturer unveiled the new Kangoo Rapid Electric in spring 2021 and followed up with further details at the end of last year. Renault produces the model at its Maubeuge site. The electric motor and onboard charger are built at the Cleon site. Regarding the start of production of the electric delivery van and its sister models from Nissan and Mercedes-Benz, the manufacturer reportedly invested 450 million euros in manufacturing. Renault does not mention prices in the current press release either.

DC charging will also be possible for the Master E-Tech Electric in future, albeit at a much slower rate: a 22-kW DC charger will be available for the electric van in future for this purpose, which will make it possible to charge energy for 50 kilometres of driving in 45 minutes. The vehicle is equipped with a 3.7 kW AC on-board charger as standard. Another new feature is the 52 kWh battery instead of the previous 33 kWh battery, which allows a WLTP range of 200 kilometres.

Renault will offer the updated Master E-Tech Electric in 15 versions – with a choice of three lengths and three heights, and gross vehicle weights of 3.1 and 3.5 tonnes at launch. A variant up to 3.8 tonnes will be added later. The four panel-van variants offer a load volume of eight to 15 cubic metres. As a further version, the platform chassis is available in the L2 and L3 variants.