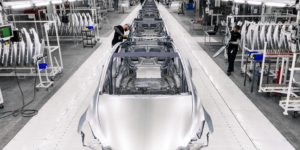 Tesla Q2 earnings slightly declined against otherwise record-breaking quarters for over a year. This came against ongoing supply chain challenges and factory shutdowns that no ramp-up could equalise entirely just yet.

Tesla reported $16.9 billion in Q2 revenue, down from $18.8 billion in the first quarter but still stayed in line with analysts’ expectations. Tesla shares rose two per cent after reporting.

The drop in revenue came from the automotive business. It followed production stops at primarily Shanghai, which suffered Covid lockdowns that could not be equalised by an otherwise record-breaking June.

Tesla also has to record a decline in quarterly profit: Instead of 3.32 billion dollars in Q1, the balance sheet now shows 2.26 billion dollars. Nevertheless, it is around twice as much – +98 per cent to be precise – as a year ago: In Q2 2021, Tesla had cracked the significant billion mark for the first time in a quarter with 1.14 billion dollars.

This year-on-year growth has also been attributed to an increased average vehicle price. Tesla has raised prices in numerous countries in recent months and prioritised more expensive models in production – customers who want their car sooner may thus be spending more money.

However, the record margin of 19.2 per cent from Q1 has fallen to 14.6 per cent and thus to the level of Q3 2021. The production problems have cost unit numbers, and in addition, the production ramp-up in two new plants is reportedly expensive. Elon Musk had called Austin and Giga Berlin “gigantic money furnaces”. Fine-tuning the machines takes time, new employees have to be trained, and the plants optimised. However, the production stop for the conversion work in July will not be incorporated until the third quarter.

The next quarter, however, will likely see the effects of ramp-ups. In the latest earnings report, Tesla even put numbers behind the target – Austin and Gigan Berlin are to make 250,000 units per year. For the key Gigafactory Shanghai, the figure has risen from more than 450,000 vehicles previously to more than 750,000 units. Together with the 100,000 Model S/X and 550,000 Model 3/Y from Fremont, Tesla is thus stating a total production capacity of 1.9 million cars per year – spread over its current four model series. The Cybertruck, Semi, Roadster 2, “Robotaxi and others” are not yet included. In the case of the Cybertruck, progress is being made in industrialisation – production is scheduled to begin after the Model Y ramp-up in Austin.

The energy business with solar roofs and stationary storage “made meaningful progress in Q2 as well, achieving higher volumes with stronger unit economics,” reads the earnings report. “This resulted in an overall record gross profit,” Tesla said. “Customer interest in our storage products remains strong and well above our production rate.”

106 MW of solar rooftop capacity was installed in Q2, the best and only triple-digit result in the past five quarters. In the case of stationary storage, Tesla customers installed 1,133 MWh. While this is an increase from Q4 2021 and Q1 2022, it is eleven per cent below the 1,274 MWh from the same quarter last year.

Tesla remains optimistic about its fundamental auto division, despite a slightly worse second quarter because the Shanghai lockdown was primarily a one-time external effect. “With each of the Fremont and Shanghai factories achieving their highest-ever production months and new factory growth, we are
focused on a record-breaking second half of 2022,” the company said.

Porsche updates the software across all Taycan models