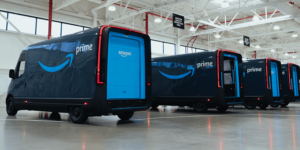 Amazon has begun using Rivian electric vans to deliver packages in the US. The launch will take place in more than a dozen cities, including Baltimore, Chicago, Dallas, Kansas City, Nashville, Phoenix, San Diego, Seattle and St Louis.

According to the online retail giant, thousands of Rivian’s electric transporters will be deployed in more than 100 cities this year. The vehicles have been designed to specufically meet the needs of Amazon’s delivery business since 2019 when Amazon ordered 100,000 electric delivery vans from Rivian. All of the electric transporter vans in the order are to be delivered by 2030.

The vehicle uses Rivian’s skateboard platform, which is also the basis for the fledgling carmaker’s R1T electric pickup and R1S electric SUV. There are two variants of the van (EDV500 and EDV700), which come in at the namesake 500 and 700 cubic feet of cargo volume – the equivalent of 14.1 and 19.8 cubic metres respectively. A third variant with a load volume of 900 cubic feet (equivalent to 25.5 cubic metres) is to follow at a later date.

The vehicles are built at the Rivian plant in Normal, Illinois, on a dedicated production line – Rivian’s own vehicles are assembled on a second line. The first Rivian delivery vans have been in test use at Amazon since last year. The company now says that these pre-production vehicles have covered over 90,000 miles (about 145,000 kilometres), delivering over 430,000 packages.

The tests have been able to test the vehicle’s performance, safety and durability in different climates and regions, Amazon says. With the feedback, Rivian was able to further develop the “state-of-the-art features” to ensure “driver satisfaction and overall functionality”.

The two companies have not yet revealed further details on the already completed test runs, the Amazon-specific features of the vans or the plans for future deployment, instead offering more general statements. “Fighting the effects of climate change requires constant innovation and action, and Amazon is partnering with companies who share our passion for inventing new ways to minimize our impact on the environment,” says Amazon CEO Andy Jassy, for example. “Rivian has been an excellent partner in that mission, and we’re excited to see our first custom electric delivery vehicles on the road.”

Rivian CEO RJ Scaringe calls it an important step “not just for Amazon and Rivian as partners, but also for transportation and the environment.” “In 2019, Rivian and Amazon committed to fast-tracking a new type of delivery vehicle that would result in a significant reduction of carbon emissions,” the Rivian boss continued. “Thanks to our teams’ dedication, hard work and collaboration, and a shared commitment to make the world a better place for our kids’ kids, that vision is now being realised.”

Rivian can apparently see itself building electric transporters beyond the Amazon deal. The company is planning a wider range of electric commercial vehicles in a variety of shapes and sizes, according to Scaringe, and expects to build millions of electric vehicles a year in several plants after 2030. He revealed that Rivian has already had a number of discussions with other customers.

Amazon has provided an update on its deployment of Rivian electric delivery trucks, which began in July 2022. More than 1,000 of them are now in use in over 100 US cities and have delivered more than 5 million packages so far.

With the experience gained so far, Amazon considers itself “ready for the very first Christmas season” with the Rivian delivery trucks. In the run-up to Christmas, which is increasingly dominated by online shopping, the electric delivery vans are now actually being put through their paces: Temperatures in many areas are dropping, while in parallel the number of parcels to be delivered is skyrocketing.

“We’re always excited for the holiday season, but making deliveries to customers across the country with our new zero-emission vehicles for the first time makes this year unique,” said Udit Madan, vice president of Amazon Transportation. “We’ve already delivered over 5 million packages with our vehicles produced by Rivian, and this is still just the beginning—that figure will grow exponentially as we continue to make progress toward our 100,000-vehicle goal.”

By 2030, Amazon aims to have all 100,000 electric transporters ordered from Rivian in use. Recently, Amazon also announced that it would invest more than one billion euros over the next five years in expanding its electric fleets and charging infrastructure in Europe.