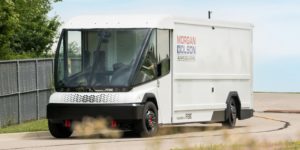 The Israeli start-up Ree Automotive, together with EAVX and Morgan Olson, has presented a demonstrator vehicle called Proxima. The electric delivery vehicle is based on Ree’s P7 platform with ‘Ree Corner’ drive modules.

The P7 is the largest of Ree’s platforms. However, the technology has been adjusted again compared to earlier information from the beginning of the year. Previously, there was talk of a maximum weight of 7.5 tonnes and a length of up to 7.6 metres.

The body of the vehicle, called “Proxima powered by Ree”, comes from EAVX and Morgan Olson. It is a fully electric and walkable van whose body is designed to take full advantage of the flexibility of the Ree P7. However, at 8.7 metres, the vehicle is LONGER and, with a total weight of up to 8.9 tonnes, it is also heavier than the maximum values mentioned so far. This means that the vehicle also falls under US Class 6; with 7.5 tonnes it would still have been Class 5.

The Isreali company’s proprietary technology is based on drive modules called ‘Ree Corner’, in which all important components are integrated. In addition to the chassis, these also include the engine, the gear reduction and the power electronics. Each module can produce up to 100 kW, and depending on the arrangement, front, rear and all-wheel drive are possible. In addition, either only the front axle can be steered – since the four modules are identical, all-wheel steering is also possible. This also seems to have been implemented in the demonstrator, because one of the press photos shows a rear wheel turned in opposite directions.

What’s more, there is a flat surface between the drive modules in the corners of the vehicle because there is no axle motor in the middle. This means that even with rear- or all-wheel drive, the loading area can be placed extremely low, the equivalent of at least 50.8 centimetres above the road surface – Ree specifies 60.9 centimetres for the Proxima. Since there is no mechanical connection between the modules, Ree also refers to this as “X-by-Wire technology”.

Moreover, since the entire body is based on the flat load floor, driver ergonomics are said to have been improved. In addition, the design of the cockpit has optimised the field of vision and thus the safety of other road users.

“These live demonstrations will convey the value and efficiencies REE’s x-by-wire technology can bring to fleets, as well as the power of pairing this revolutionary chassis with EAVX and Morgan Olson’s high-tech body,” says Daniel Barel, co-founder and CEO of Ree. In addition, such a vehicle should offer a low total cost of ownership – in the event of a defect, for example, a complete ‘Ree Corner’ module can be quickly replaced, thus reducing the vehicle’s downtime.

In the coming weeks, the three partners plan to convince potential customers and gather feedback at test drive events. “We are excited to share this first Proxima concept and its potential impact on the industry with these customers,” says Mark Hope, COO and General Manager of EAVX. “In initial conversations, the vehicle has already received praise from customers large and small across a range of delivery segments.”