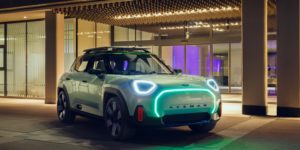 Mini has shown a battery-electric crossover called Aceman to preview a new concept for the premium small car segment. Exact data on the vehicle or drive are scarce – the Mini Concept Aceman is a pure design study which Mini considers a harbinger of new interiors and materials.

The Mini Concept Aceman is 4.05 metres long, 1.99 metres wide, and 1.59 metres high – the BMW brand does not mention more than these three figures in the press release. The drive is purely electric and the basis of the design, but Mini does not want to commit to range or performance figures yet.

“The Mini Concept Aceman provides a preview of a completely new vehicle that occupies the position between the Cooper and the Countryman in the future model family,” says Stefanie Wurst, head of the Mini brand. “This concept vehicle reflects how Mini is reinventing itself towards an all-electric future and what the brand stands for: an electrified go-kart feel, an immersive digital experience and a strong focus on a minimal environmental footprint.”

As Oliver Heilmer, Head of Mini Design, indicates, the all-electric vehicle concept has allowed the body design to focus again “more on Mini’s traditional core values in terms of the principle of Creative Use of Space”. The designers did not have to consider the installation space for the combustion engine, transmission and exhaust tract, but were able to build on a much flatter battery platform. “This results in models that take up little space on the road while offering more comfort, more versatility and more emotion inside than ever before,” says Heilmer.

The concept of pure EV platforms – long wheelbase and short overhangs – coincides with the concept of the original Mini. In the Aceman, too, the designers take up these proportions to accommodate five seats and a luggage compartment with a large tailgate on the aforementioned 4.05 metres in length. Heilmer’s team also retained the three-part design of the body, window areas with dark A, B and C pillars and the colour-accentuated roof.

Most of the other elements, however, have been reinterpreted. At the front, the classic Mini grille is only hinted at, and the LED headlights are significantly more angular than before. The transitions between the glass surfaces and the body are supposed to be seamless to improve aerodynamics. However, you won’t find the typical Mini chrome elements on the Concept Aceman.

The Mini design has also been reinterpreted in the interior – with a new mix of materials. Leather is no longer used; instead, “with a clear focus on sustainability, selected materials” have been used. In addition to sustainability, digitalisation plays an important role, especially with regard to the characteristic central instrument. Mini claims to be the first manufacturer to install a round OLED display in a car. The display and control system in the production vehicle will be based on the latest generation of the MINI Operating System, which for the first time is based on an Android Open Source Project (AOSP) software stack. According to Mini, this will enable a particularly comprehensive expansion of digital offerings in the vehicle.

Mini’s new user experience also includes light and colour effects – an eye-catcher that was probably chosen with the premiere audience in mind: The Concept Aceman will be exhibited for the first time at the Gamescom gaming trade fair, which will take place in Cologne in August.