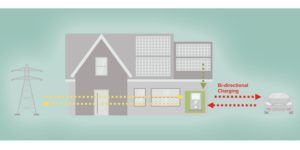 The German chip manufacturer Infineon Technologies and the Taiwanese charging infrastructure manufacturer Delta Electronics have developed a 3-in-1 system that integrates solar power system, home storage and charging station. Thanks to bidirectional inverters, the electric car can not only be charged, but also act as a buffer storage for the home’s emergency power supply.

Infineon does not give many details about the system in the press release. Only this much: with an output power of about 10 kW, the new system from Delta is supposed to allow a maximum continuous current of 34 A and achieve peak efficiencies of more than 97.5 per cent. To increase power density and efficiency, power semiconductors made of silicon carbide (SiC) from Infineon are used.

Thanks to SiC, the energy losses when converting electricity are to be reduced by around half compared to pure silicon-based semiconductors. Due to the higher energy density, the charging station can also be about 30 per cent smaller. “With SiC, photovoltaic systems become more powerful, charging times at fast-charging stations and wall boxes are shorter, and the range of electric cars five to ten percent higher,” Infineon writes.

Infineon puts the average consumption of a single-family home at ten to 15 kWh per day. This demand, which is particularly high in the morning and evening hours, can be partly covered by the home’s own PV electricity from the home storage system. However, the batteries in electric cars are usually significantly larger – and thus offer more potential. With the average daily consumption, a single-family home could be operated for several days only with the cheap, self-generated solar power – for example in the event of a power failure as an emergency power solution or much more frequently on cloudy days. And it also becomes cheaper to run the electric car.

“In order to make a sustainable contribution to decarbonisation, we need to think of electromobility holistically: from the generation of green electricity and a stable, efficient grid infrastructure to storage and consumption,” says Peter Wawer, Head of Infineon’s Industrial Power Control Division. “With our solutions for bidirectional charging, the electric car at home can be charged cost-effectively with solar power and equally serve as a buffer storage.”

Infineon writes that “more and more cars” are equipped for this. But no standard for bidirectional charging has yet become established on the market. Some providers favour a solution with alternating current – since Infineon speaks of “bidirectional inverters”, it also seems to be an AC solution. Here, the electricity between the home storage (direct current) and the vehicle battery (also direct current) only has to be converted to alternating current for the charging process. Some companies, such as Volkswagen with its MEB models, therefore prefer more expensive DC wall boxes for bidirectional charging.

The Mobility House finds new US partner in Endera