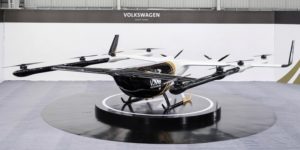 Volkswagen Group China has unveiled a prototype eVTOL. The passenger drone is called V.MO and is nicknamed the “Flying Tiger” in a nod to its target launch market. Future series models will carry up to four people and their luggage over 200 kilometres.

The V.MO concept is not Volkswagen’s first entry into a market that the industry now calls Urban Air Mobility or Advanced Air Mobility (Hyundai). Volkswagen Group China already launched a project in 2020 to develop an electric Vertical Take-Off and Landing aircraft (eVTOL), and Volkswagen expects UAM to be a fast-growing market. “In China, it will play an important role in the future of urban and municipal transportation in the congestion-plagued megacities,” so the company.

Part helicopter and part drone, the V.MO has an “X-wing configuration” and eight rotors for lift and two additional rotors for forwarding drive. The V.MO is 11.2 meters long and has a span of 10.6 meters. VW has not disclosed technical data on the propulsion system and battery. The company will carry out initial flight tests to optimise the concept technically. An improved prototype announced for late summer 2023 will “complete even more extensive test flights,” VW says.

According to Stephan Wöllenstein, CEO of Volkswagen Group China, “We want to bring this concept to series production in the long term and, like a ‘Flying Tiger’, assume a pioneering role in this new and dynamic mobility market,” the manager said. It is currently the Chinese Year of the Tiger, and VW stresses that the project was part of the mission to deliver “From China, for China”.

Vertical Mobility has a young team of Chinese experts behind it. Chinese partners such as Hunan Sunward Technology, a company that specializes in developing and selling general aviation aircraft and related services and is a market leader in light sport aircraft, are supporting the team.

VW set no launch date for the series V.MO but expects to offer the aircraft as a “premium product for wealthy tech-savvy customers in China”.

The Flying Tiger is just the latest advance in the larger Volkswagen universe. Group brands have been looking into eVTOLs before, but Audi reportedly discontinued its “flying car” project with Airbus in 2019. Porsche continues exploring Urban Air Mobility, together with Boeing. A 2018 study by Porsche Consulting forecasted that the UAM market will pick up speed after 2025.

Supernal to use eVTOL batteries by EP Systems

SkyDrive next up to opt for EP Systems’ air taxi batteries