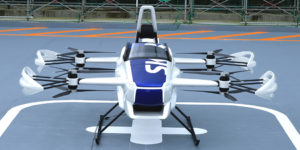 News of advances in urban air mobility keeps flying in with Electric Power Systems announcing a new customer, this time from Japan. SkyDrive, a self-described developer of flying cars based at Toyota City, has opted for EPS’ ‘EPiC’ battery system to power future passenger drones.

SkyDrive aims to launch the air taxis in the Osaka area in 2025 in time for the World Exposition. The EPiC battery by EP Systems, which includes battery modules and a BMS, is to help power the SD-05 aircraft safely and handle the disconnect box.

Tomohiro Fukuzawa, CEO of SkyDrive, said EP Systems was their “ideal partner for this essential element of our two-seater aircraft SD-05. They are very focused and committed to developing performing and reliable battery systems.”

EP Systems counts Boeing and Safran among its investors and are close to certifying their EPiC battery system for high-volume manufacturing. Other clients include NASA and the FAA, Bell Textron, Embraer, and Diamond Aircraft. This week, Hyundai’s urban air mobility subsidiary Supernal also announced working with EP Systems.

EP Systems has a new 16-acre campus in North Logan, Utah, where it is building out 70,000 square feet of manufacturing space to accommodate a production ramp as it nears FAA certification. The first commercial units rolling off the production line are scheduled for Q1 2023.

Meanwhile, their battery systems power flight demonstrators such as NASA X-57, Aurora Flight Sciences Pegasus, and many other aircraft manufacturers.

As for SkyDrive, the Japanese company is currently applying for type certification of the two-seater electric plane in Japan. Established in 2018, they first appeared on our radar in April this year, when they announced cooperation with Suzuki to develop business models and manufacturing for the flying car. There has also been talk of expanding to India.