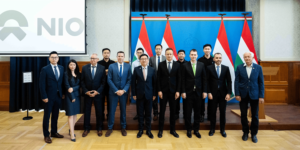 The Chinese manufacturer Nio plans the third brand for even more affordable electric cars. According to a media report, the third Nio label will cover the EV segment with a price range of 100,000 to 200,000 yuan – equivalent to about 14,500 to 29,000 euros.

In addition to the current core Nio brand with higher-priced models, Nio initially plans to launch a new brand for electric cars between 200,000 and 300,000 yuan in the second half of 2024. This brand is codenamed ALPS, according to the new report by the portal 36kr. It is unknown when Nio will launch the third subsidiary and under which name.

Each of the brands may run under an independent management and R&D team, according to the report. Nio is recruiting a core team for the as yet unnamed budget brand. A separate development team could make perfect sense, as the technological synergies between the Nio vehicles with batteries between 70 and, in future, 150 kWh are likely to be manageable. According to 36kr, the new brand should specifically cover the market for low to medium ranges.

According to a Chinese auto blogger, the third project will be codenamed ‘Firefly’ or ‘GJ’ internally. The first model could resemble SAIC-GM-Wuling’s China bestseller Baojun E300 aka the Mini-EV, according to the Weibo blogger.

Nio founder and CEO William Li would not comment.

What is clear is that Nio is pushing ahead with European expansion for its main brand. The company now officially has a factory in Europe to manufacture battery swap stations. The factory, located near the Hungarian capital Budapest, is scheduled to start operations this September and will serve as a service, research and development centre in addition to production.

There were recent reports of this plant in Hungary, but no details were known about the opening. In the announcement, Nio confirms the size of 10,000 square metres, but mentions no production capacity. With the European production, Nio says it wants to “create a solid foundation for local battery replacement and charging services”.