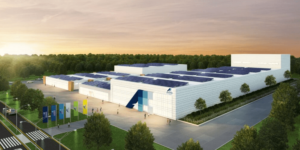 The US company Ascend Elements has announced plans to invest up to one billion US dollars in a factory to produce sustainable battery materials for electric vehicles in southwestern Kentucky. Production shall start at the end of 2023.

Ascend Elements expects construction at Hopkinsville this year, with operations to begin by late 2023. The facility will use the company’s “hydro-to-cathode” technology, which directly processes black mass from recycled EV batteries into new cathode materials. The usual intermediate step of hydrometallurgically splitting the black mass into individual materials to produce new cathode materials is redundant.

An investment of 310 million US dollars (currently 304 million euros) is to be made in the first stage of the plant, which is called Apex 1. The production capacity is unclear from the announcement.

The investment of one billion dollars or 980 million euros will not come together until the last of “several possible” phases. Then the plant should be able to produce enough lithium-ion cathode material for up to 250,000 electric vehicles. It is not known by when this final expansion is to be achieved. Up to 400 jobs will be created in the last development, from engineers and chemists to production and warehouse employees.

Ascend Elements describes its self-developed process technology as a closed manufacturing system. Compared to conventional processes for cathode production, this should produce only “minimal waste and CO2 emissions”. Apex 1 will also have its chemical recycling facility and a waste-water treatment plant.

According to CEO Michael O’Kronley, the company considered more than 50 sites for the plant – Commerce Industrial Park II in Hopkinsville was the only site that met all the requirements. The company cites such things as easy access to transportation, clean energy and a potential workforce. Proximity to electric vehicle manufacturers and lithium-ion battery factories in the southeastern United States was another vital requirement. He said that relative accessibility to the company’s Covington, Georgia, facility (350 miles) was also a factor.

In Covington, Ascend Elements operates a battery recycling facility called ‘Base 1’. The black mass produced at Base 1 (i.e., the end product of most battery recycling processes before hydrometallurgical processing) is an essential feedstock for Kentucky’s new Apex 1 plant.

“We’re in the middle of a global energy transformation, and we must produce lithium-ion battery material in the United States. Our future energy independence and national security depend on it,” says O’Kronley. “This new facility in Hopkinsville will produce sustainable, active battery material for approximately 250,000 EVs per year. That will go a long way toward making electric vehicle batteries cleaner.”

Ascend Elements has received a boost for the above battery materials factory in Kentucky. SK Ecoplant, an SK company, is investing $50 million.

In turn, the investment demonstrates SK Ecoplant’s commitment to the North American EV battery market and strengthens the relationship between the two organisations, reads a statement.

More news from Ascend Elements or more funds has come in, so the company has begun constructing its announced factory in southwestern Kentucky. When completed in late 2023, the Hopkinsville factory shall produce enough sustainable cathode material and precursors for up to 250,000 electric vehicle batteries per year.

As reported, the announcement coincides with the US Department of Energy selecting Ascend Elements as one of 20 companies to receive funding for its activities along the US battery supply chain. The company will receive just over $316 million in funding.