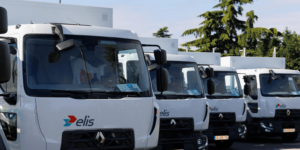 French company Elis has acquired eleven electric trucks from Renault Trucks. The textile service will use the new EVs for night-time delivery and collection of linen from Elis customers in the hotel and catering sector in Paris and Clermont-Ferrand.

Elis reasons that low-emission zones in Paris and Clermont-Ferrand have made this a necessary step in line with its CSR commitments. The eleven electric trucks of type E-Tech DE will travel more than 100 km daily and serve around 700 customers weekly. Elis has installed AC charging infrastructure at its laundry centres.

The company committed to decarbonising by 2025. Accordingly, the new Renault EVs follow purchases Ellis made for another three sites in France, where they acquired ten new light electric vehicles. The company would not disclose details but added that another eight Renault Zoe cars were also in operation.

As for the new Renault electric trucks, the manufacturer offers lithium-ion batteries from 200 to 400 kWh to enable ranges of up to 400 kilometres. The 16-ton vehicles have a 185 kW electric motor (maximum output), and Renault specifies the continuous line at 130 kW. The maximum torque is 425 Nm. The payload is up to 11 tons.

Renault is also accelerating the decarbonisation of its operations and aims to make electric vehicles the new standard. The company targets realising half of its sales volume electrically by 2030.