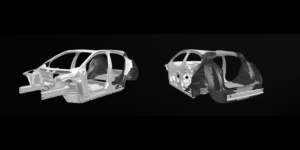 Jaguar Land Rover’s new vehicle laboratory features two anechoic chambers. One simulates an electrically ‘quiet’ rolling road that enables engineers to test vehicles at speed and equipment to assess the performance of individual components, such as batteries or electric motors.

As for EMC, this signifies electrical equipment and systems function correctly in an electromagnetic environment.

EMC testing is crucial for the increasing number of electric powertrains and the range of digital and cloud-based services on vehicles, from Software-Over-The-Air updates to autonomous technology, JLR explains.

It is unclear whether testing will be open to other manufacturers. Aston Martin also sits in Gaydon, and newcomer Britishvolt is not far either.

Land Rover will launch six all-electric models in the next five years, the first of which will come in 2024. By the decade’s end, an all-electric variant will be available for all Jaguar Land Rover model ranges.