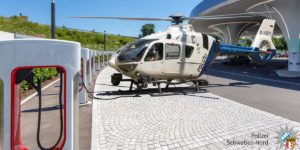 There’s a police helicopter standing at the Tesla Supercharger in a picture on Twitter. It is not a case of extreme ICEing or vandalism but a campaign of a higher order.

For those new to electric vehicles, ICE-ing means the malpractice of using EV charging bays for parking your internal combustion engine (ICE for short), thus blocking access for those needing to charge.

In some countries, this has become a case for the police. In Germany, ICEing prompted a Police Department in Bavaria to a day of action against blocking charging stations when parking.

The police made their case with a humorous approach to visualise the issue using their helicopter, and the department added that they were lucky to find so many charging bays available.

That may also be due to these being Tesla Superchargers. The company only recently enabled drivers of non-Tesla cars to charge at its hubs and, of course, has not (yet) included helicopters in said opening up. (Perhaps VTOLs will be next?!)

What is more, Swabia, where the police department is located, being a region of Bavaria, is likely to have drivers opting for cars made in the state, i.e. Porsche, BMW or Mercedes.

Lastly, the police helicopter never made a landing at the Supercharger. The picture is a montage made for effect.

Avtovaz to produce an electric Lada