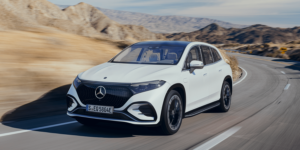 Mercedes-Benz has released the SUV offshoot of the all-electric EQS for sale, with prices in Germany starting at €110,658. The EQS SUV can now be ordered in three drive variants, and the first vehicles are expected to reach European customers this December.

This makes the EQS SUV 450+ exactly 3,332 euros more expensive than the corresponding EQS Saloon, which as the 450+ even only has 245 kW according to the Mercedes configurator. Around the presentation of the EQS SUV in April, Mercedes representatives had already announced that the power output of the sedan would also be raised to the values of the SUV. For the 450 4MATIC, the price difference between the saloon and the SUV is at a similar level of 3,312 euros.

The other drive versions already available for the saloon (EQS 500 4MATIC for 123,153.10 euros and the Mercedes-AMG EQS 53 4MATIC+ for 152,546.10 euros) are not yet available for the SUV model at market launch. It is not yet known whether they will follow in this or a modified version for the EQS SUV. In view of Mercedes-Benz’s strategy of focusing on luxury vehicles, further high-margin offshoots would only be logical.

Other extras are to come at extra cost, which Mercedes highlights in the press release, include the radiator grille with a star pattern for 392.70 euros, the augmented reality HUD for 1,082.90 euros and also a trailer manoeuvring assistant for 416.50 euros, which is supposed to make manoeuvring with the towing vehicle easier by automatically regulating the steering angle on the towing vehicle up to a speed of 5 km/h and up to a gradient of 15 per cent. In contrast to the sedan, which can only tow 750 kilograms, the EQS SUV can tow up to 1.8 tonnes – for an additional 999.60 euros.

However, Mercedes only includes some of the cheaper options in its announcement. For example, if you want to order the ‘Night Package’ with heat-insulating and tinted glass for 803.25 euros, you can’t avoid the ‘AMG Line Advanced Plus’ for a hefty 17,861.90 euros, according to the configurator. And if you want to order one of the two 450 models, you have to order the Hyperscreen for an extra 8,568 euros if required – the Hyperscreen is only standard from the 580 4MATIC onwards.

Unlike the EQS built in Sindelfingen, the EQS SUV is an imported model in Germany: as reported, the EQS SUV and also the forthcoming EQE SUV are built at Mercedes’ US plant in Tuscaloosa.

Volkswagen to introduce the ID.3, ID.4 and ID.5 range in Australia