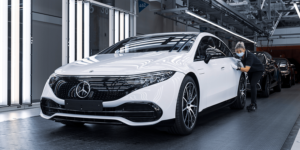 Production of the EQS electric saloon has now started in Factory 56 at the Mercedes-Benz Sindelfingen plant in Germany. The new S-Class, its long-wheelbase version and the Maybach variant of the S-Class are already built at the plant.

The EQS, which was presented in mid-April, is the fourth and first fully electric model to be added to the range. The S-Class is only available as a plug-in hybrid at most because of the EQS. The role of the electric flagship, on the other hand, is to be taken over by the EQS on a pure electric platform. Daimler has not given any details on the planned number of units.

Factory 56 was built specifically for the production of the S-Class and the EQS and could therefore be designed for the sustainability and requirements of the two models from the very beginning. According to Daimler, the “marriage” in which the powertrain and body are connected is called a “fullflex marriage” in Factory 56. It consists of several modular stations so that pure combustion engine models, plug-in hybrids and the EQS on a pure electric platform can be produced together on one line.

“The production of the EQS in Factory 56 marks the beginning of the future of our global Mercedes-Benz production network: this future is CO2-neutral, sustainable, fully digitalised, networked and highly flexible,” says Mercedes Board Member for Production Jörg Burzer. “The start of production of the EQS is a highlight in our unprecedented electric vehicle initiative in the production area. In 2022, a total of eight Mercedes-EQ electric vehicles will be produced at seven locations on three continents.”

The EQS will initially be offered in two versions as the EQS 450+ and EQS 580 4MATIC. The former is a 245 kW rear-wheel-drive model that comes with the much-mentioned WLTP range of 770 kilometres. An output of 385 kW was mentioned for the EQS 580 4MATIC with all-wheel drive and one e-motor per axle, but Mercedes has not yet said what range can be expected.

Both electric cars have a battery with 107.8 kWh of usable energy content and a variant with 90 kWh is to follow later. The batteries themselves will be assembled in the Hedelfingen section of Daimler’s main plant in Stuttgart-Untertürkheim and then delivered to the Sindelfingen vehicle plant.

Prices for the EQS have not yet been revealed. Mercedes plans to publish these at the sales launch in June.