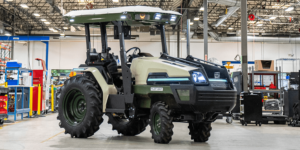 The Taiwanese contract manufacturer Foxconn will in future also build electric tractors and batteries for them in the USA. An agreement now concluded with tractor supplier Monarch Tractor provides for Monarch’s MK-V series electric tractors to be built at the Foxconn plant in Ohio from 2023.

As is well known, this plant is the one that Foxconn bought from electric car start-up Lordstown Motor to take over the production of the Lordstown Endurance electric pickup truck.

Monarch still plans to build the so-called Founder Series of the electric tractor itself in Livermore, California, in the fourth quarter of 2022, before series production is to start in Ohio in the first quarter of 2023. The MK-V will also be able to operate autonomously.

According to Monarch, the MK-V can be operated for up to ten hours on one battery charge. With a special battery change trolley, 24-hour operation is also said to be possible. At work, the MK-V, which has a power output of just over 50 kW, is supposed to score with its high torque at a smaller size. Since power can be drawn from the battery via a connection, it should also be possible to operate electrical equipment in areas of the farm without a power connection. The MK-V also has a PTO and hydraulic top and side links.

The announcement does not say anything about the planned number of units that Foxconn will build for Monarch.

businesswire.com, monarchtractor.com (specs for the MK-V)