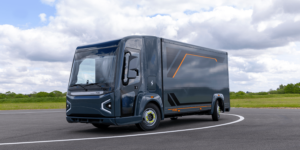 The Israeli start-up Ree Automotive has presented another all-electric van based on its P7 platform. The P7-B also uses the company’s ‘Ree Corner’ drive modules and qualifies as a US Class 3 electric truck.

Ree Automotive says the P7-B has a gross vehicle weight of 6.4 tonnes with a payload of two tonnes. It has an output of up to 400 kW and offers a range of 240 kilometres.

The high peak power for a van is due to the concept of the drive modules: The ‘Ree Corner’ modules contain all the important components from the chassis and steering to the power electronics and the 100 kW electric motor. Since one such module is installed in each corner of the P7-B, the van has four 100 kW motors. Since each module has its own steering, the van has all-wheel steering and, according to the announcement, a turning radius of just six metres.

Thanks to the engines close to the wheels in the corner modules instead of centrally placed axle drives, the space between the wheels can be used as a loading area. This is only 58 centimetres above the ground, and Ree states that the load volume of the P7-B is up to 23 cubic metres.

In July, Ree Automotive had already presented a US Class 6 electric delivery vehicle called Proxima with a total carry weight of up to 8.9 tonnes. Both vehicles share technology but are in different size classes. The new P7-B is part of a fleet of vehicles that will be made available to potential customers for test drives. Production of the two vehicles is planned in both North America and the UK.

“The on-track testing of the P7-B and extensive customer evaluations are another crucial step on the road to commercialization and deployment of test fleets followed by scale adaptation in fleets,” said Tali Miller, Chief Business Officer at Ree. “Feedback from our customers has been that this is the truck they have been waiting for – a driver-centric work truck that drives like a sedan but is built to deliver under the harshest commercial duty cycle. Our modular P7 chassis allows us to design vehicles tailored to our customers’ needs and we are excited to be showing them what our unique technology affords their fleets as we support them on their path towards electrification and carbon neutrality.”