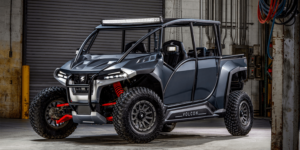 Volcon, a Texas-based off-road electric vehicle startup, will equip all of its models with General Motors powertrains. The company offers two- and four-wheeled electric vehicles for off-road use that are equipped with battery modules and other electric drive system components from GM.

Volcon’s products are not off-road electric vehicles or pickups, which are in direct competition with GM vehicles such as the Hummer EV, but UTVs. As Volcon now announced, this includes the Volcon Stag, which was recently introduced as a flagship model. The UTV uses battery modules and a “number of supporting components from GM”. Details on these components are not yet known, however.

The Stag will – usual for a UTV, but unusual for a BEV – have mechanical all-wheel drive. As soon as the rear wheels lose traction, drive power is also sent to the front wheels as needed. Volcon has dispensed with the second electric motor on the front axle, which is common in BEV cars. The battery is charged with up to 7.2 kW AC.

In addition to recreational driving, the Stag is also suitable for transport in remote areas – as long as the distances are not too long. When the rear seats are folded down, the vehicle can load up to 736 litres. The payload is 703 kilograms and the towing capacity 907 kilograms.

“General Motors has transformed from an automaker to a platform innovator, with scalable architectures designed to accelerate EV adoption across different industries and product types,” said Travis Hester, GM’s vice president of EV Growth Operations. “Our work with Volcon is indicative of our plans and demonstrates the flexibility of the platform as well as potential applications well beyond traditional vehicles.”