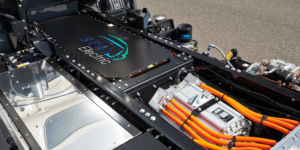 Pilot vehicle integration in SEA Electric commercial vehicles will begin as early as November of this year, followed by track and on-road testing in 2023. These testing phases will culminate with series production Exro 400V Coil Drive System units.

As per this new agreement between SEA Electric and Exro Technologies, the phases leading to series production will begin with delivery of up to 25 Coil Drive System sample units. These are to be used as a part of a joint nine-to-twelve-month pilot program of on-road testing phase in the SEA’s next-generation F-59 Class 5/6 delivery vehicles built on the Ford F-59 step van platform.  After these vehicles have successfully completed in-field validation, the first purchase order will supply 500 units with deliveries starting in Q4 2023, followed by an increasing volume of production series systems up to a minimum of 1,500 units over the 36-month term of the agreement.

While the two companies have been collaborating since 2020, this particular agreement moves the partnership into a new commercial phase for SEA Electric’s next generation F59, which the company says is will be perfect for short stop-start delivery runs. Other collaborations between the two companies include developing an SiC 800V application for a next-generation Dennis Eagle heavy-duty truck.

Extro says that the Coil Driver optimises the performance and efficiency of electric motors and batteries through power electronics, effectively acting as an electronic gear. Here, the physics of coil-switching is utilised to expand the capabilities of motors by enabling two separate torque profiles (low-speed torque and torque at speed). Extro points out that this technology can reduce the number of motors and the size of batteries and eliminate the need for mechanical gearing allowing electric vehicles to achieve better acceleration, gradeability, high-speed torque and improved efficiencies for a lower cost.