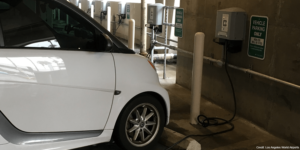 The Los Angeles International Airport (LAX) targets having 1,300 charging points for electric vehicles by the end of the year. The overhaul will place the airport among the largest charging facilities in the US.

While information is scarce, the LAX park management company ABM says it will be one of the most extensive EV charging ports in the United States when complete, local media reports.

And the revamp is well underway. 832 chargers are already in operation, offering both AC and DC power. AutoBlog names Energy company PowerFlex as a contractor to install the EV charging stations at LAX. They mention no more than eight DC charging stations in the economy car park, further from the terminal.

600 charge points are reportedly located in the central car parks, with the remaining charging stations in said economy car park. Drivers may reserve a spot in advance on the airport’s homepage. To use the charging stations, there is a one-off two-dollar fee and then a charge of $0.45/kWh. Parking fees are additional, but there are discounts for electric cars.

The expansion of the charging infrastructure is part of a comprehensive modernisation programme at LAX. The Landslide Access Modernisation Program (LAMP) has a total budget of 5.5 billion US dollars.

It is also in line with Los Angeles turning itself into a model city for e-mobility. Most recently, the second most populated city in the US, discussed to ban the construction of new gas stations. The Los Angeles city council also passed the ‘Electric Vehicle Master Plan’ to electrify more than 10,000 council vehicles and build charging infrastructure.

>> Have you been to LAX and used the new charge points? Share your experiences in the comments below.

Enel X Way turns to Tritium for US expansion